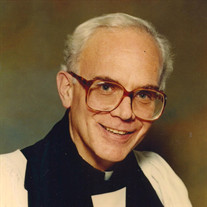 The Reverend Allen Arthur Hinman, age 77, died Thursday, February 20, 2020 at the VA Hospital in East Orange, NJ, from complications of treatment for lung cancer and a recent fall. Rev. Hinman served as rector of St. John’s Episcopal Church, Passaic, NJ for 19 years before retiring in 2004. Born September 28, 1942 in Louisville, KY, he was raised in Oklahoma, Brooklyn, NY, Memphis, TN, St. Joseph, MO, Cranford, NJ, and Winnetka, IL as his father received promotions with The Quaker Oats Co. After graduating in 1964 from Cornell University, where he took ROTC, Allen served as captain in the US Army Medical Service Corps with the Wolfhounds. He earned the Purple Heart and Bronze Star for Valor while in Vietnam, 1966-67. Upon his honorable discharge, he joined Vietnam Veterans Against the War, walking in a three-day protest march from Morristown, NJ to Valley Forge State Park, PA with over 200 veterans. Allen was a 1970 graduate of Union Theological Seminary, NYC, and received postgraduate training at the General Theological Seminary, NYC. He was ordained to the diaconate in 1970 and to the priesthood in 1971 at St. Paul’s Church, Englewood, NJ. He married Marion (Mon) van Gelder, a fellow student at Union, in 1969, and they celebrated 50 years together last year in Germany. His first position as a priest was All Souls Church in Harlem (1970-1974) as assistant to the Reverend Clifford Lauder until Lauder’s retirement, then priest-in-charge until a replacement was selected. Rev Hinman served as administrative director of the Manhattan North Inter-Parish Council in 1974-75, then became assistant to Dr. M. Moran Weston at St. Phillips Episcopal Church, Harlem in June 1975. Upon Dr. Weston’s retirement, he was priest-in-charge till he led the church’s search committee to find a permanent rector in 1985. Rev. Hinman became rector at St. John’s Episcopal Church in Passaic, NJ (1985-2004) succeeding Father Ed Partridge, who had been sent by the Diocese to close this Parish that could not support itself. During Rev. Hinman’s tenure, St. John’s endowment tripled, which allowed the church to continue and to undertake significant structural upkeep to both the church building and St. John’s Thrift Shop. Rev. Hinman’s ministry was remembered for many things: his concise and insightful sermons, his visits to sick parishioners, Wednesday night Lenten series, ending with Good Friday services on the Seven Last Words of Christ, a Boy’s Choir for several years, New Year’s Day Open House with soup, bus trips to St. Thomas Church in NYC for Epiphany, and once the neighborhood became largely Jewish, his observing the Night of Broken Glass with Jewish speakers. Throughout his professional life in New York and New Jersey, and after his retirement, Allen served in many capacities on NY and NJ boards of Planned Parenthood. He was President of the Board of Trustees of Planned Parenthood of Metropolitan NJ for several years from 1997. Allen was instrumental in securing over $2 million through an agreement between Wayne General Hospital, St. Barnabas Health Care Systems, and St. Joseph's Hospital for PPMNJ to provide reproductive health care services to the Wayne general population. Allen was an early member of The United Passaic Organization, a Federal Community Agency of interfaith clergy and lay people organized to improve the quality of life in Passaic by such programs as Utility Assistance, Sink or Swim Mentoring Program, The Emergency Food Pantry, and a guaranteed job for high school graduates who met certain attendance and other qualifications during their schooling. After retirement, he attended a weekly Veteran’s PTSD group. Allen loved his family, friends, fellow veterans, Wolfhound reunions, restaurants, theater, and dance concerts in NY and NJ, pets, fishing, gardening, cooking, hosting friends for Christmas, Easter, St. Patrick’s Day, Labor Day, etc., and cooking for church youth groups or potlucks. He wrote weekly wry movie reviews for his friends of his Friday night movie dates with his wife. Allen is survived by his wife Mon, brother Dick Hinman, nephew Charles and niece Betty of CA, sister Mary Kelly of Sun City, AZ, and cousin Alice Buchanan of Charlottesville, VA. Allen also is remembered by his Liberian family: Helena, David, David, Jr. and Tracy Holmes, Gabriel and Nicole Daniels, Hannah and Urais Youboty. Allen’s funeral mass with ashes and choir will be on Saturday, March 14, at 11 a.m. at Grace Episcopal Church, 200 Highfield Lane, Nutley, NJ. Arrangements by Cremation Society of New Jersey – 470 Colfax Avenue, Clifton.

The family of Allen Arthur Hinman created this Life Tributes page to make it easy to share your memories.

Send flowers to the Hinman family.