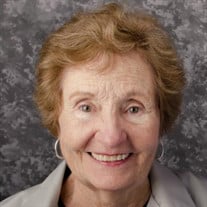 Ann Collins Ainley, 88, died peacefully in her sleep near her home in Mahwah, NJ this past Labor Day weekend. Ann is survived by her son Dave who lives in Eden Prairie, MN, her daughter and son-in-law Elizabeth and Allen Michels, as well as her five grandchildren, Greg Michels, Jessica and Mike Ainley, Jon and Nate Ainley, her brother-in-law Tom Lally and many nieces, nephews and cousins. Ann lost so many beloved family members of late, most recently her adoring son Christopher and sister Rita Lally. She was also predeceased by sister Mary Collins, brother Fr. Francis Collins, CSSR, and brother and sister-in-law Thomas and Cathy Collins. In July of 2020, she moved with Elizabeth and Allen from Cape Cod to Mahwah, NJ to be closer to family and surviving siblings, her brother Fr. Raymond Collins, CSSR, and sister Sr. Teresa Collins, CSJ. Ann grew up as one of seven children in Bay Ridge, Brooklyn. She married her husband John Ainley (deceased) after first meeting at Our Lady of Perpetual Help for a church dance. Ann and John were married almost sixty years. They raised their children in Sudbury, MA, where Ann worked at Digital Equipment Corp for twenty years. While in Sudbury, she belonged to a longstanding women friend’s book club. Continuing their church-centered childhood, Ann and John attended mass regularly and formed a group of four close couples dedicated to active community service, including feeding the homeless at the Salvation Army. Ann and John both retired while living in Newton, MA. During this time, Ann taught ‘Learning in Retirement’ courses at Boston College and Regis College. They had a second home in Cape Cod and eventually moved fulltime to their house in Yarmouth Port. This home became the epicenter for family reunions and gatherings with their many wonderful friends and neighbors. Ann had a fighter personality. She is remembered as an active person who exercised at the gym all her life, and as an avid reader with a passion for Politics. Ann and John were nearly always “on the go” and before cell phones, the answering machine was the only faithful way to reach them most evenings! She was always upbeat and constantly kept those around her laughing. We would like to invite you to the funeral mass at St. Paul’s Church, 200 Wyckoff Ave in Ramsey, NJ, her brother Fr. Raymond Collins presiding, which will be held on Friday, September 17th at 10:30am. Prior to the service, we invite you to visit with family in the front of the church at 9:45am. For those unable to travel, there will be a simulcast of this celebration of her life (link to live simulcast mass to be sent directly). In lieu of flowers, donations can be made to: The Salvation Army of Framingham P.O. Box 311 Framingham MA 01704 www.SalvationArmyMA.org/Framingham

Ann Collins Ainley, 88, died peacefully in her sleep near her home in Mahwah, NJ this past Labor Day weekend. Ann is survived by her son Dave who lives in Eden Prairie, MN, her daughter and son-in-law Elizabeth and Allen Michels, as well as... View Obituary & Service Information

The family of Ann Collins Ainley created this Life Tributes page to make it easy to share your memories.

Ann Collins Ainley, 88, died peacefully in her sleep near her...

Send flowers to the Ainley family.