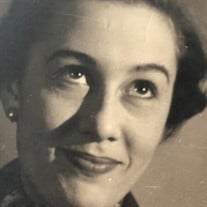 Daphne Patricia Knight of Glen Rock, N.J. died on December 25. She was 87. With her typical steely resolve and impeccable timing, she magically arranged for her 5 grown grandchildren to be in the same place at the same time at Christmas. Born and raised in London, Daphne came to the United States in 1967 with her late husband Brian and two young sons, Paul and Julian. She was instrumental in starting the Glen Rock Soccer Club, which made her a local rock star for five decades. From a corner of her basement, she ran the engine room for the soccer club. She sewed corner flags, put numbers on soccer jerseys & stripes on shorts, registered players, and, in general, marshalled the resources for a budding grass-roots organization. Inspired by a request from a younger sister of one of the club’s players, Daphne advocated to form a girls’ team which many believe to have been amongst the first in the nation and coached the team without ever having played herself. Daphne’s tenacity goes back to her childhood in England. She survived The Blitz of London, spending many nights sleeping in the local underground tube station for safety, before being evacuated to the countryside with her younger sister as part of Operation Pied Piper. And when she had to relocate her family, she made a new life in a new country, 3,500 miles from home. Daphne is survived by two loving sons; Paul and Julian, two grateful daughters-in-law; Gail Belsky and Charleen Knight, and five adoring grandchildren; Danielle Knight, Emily Miller (Todd), Madeline Knight, William Knight, and Sylvia Knight. A celebration of her life is scheduled for February 8th at 11:00 AM at the Glen Rock Community Church with gathering afterwards in the Fellowship Hall. A donation from Daphne’s estate has been made to Just One Soccer; a Newark, NJ based not-for-profit organization with a mission that’s very much in line with the vision Brian & Daphne Knight had when they founded the Glen Rock Soccer Club; In lieu of flowers, the family suggests support of same at the link below, or a donation of your time to a local youth sports organization. Just One Soccer Donation Link: https://www.leaguelineup.com/formpreview.aspurl=justonesoccer&formID=139389. Arrangements by Cremation Society of New Jersey - 470 Colfax Avenue, Clifton, NJ.

Daphne Patricia Knight of Glen Rock, N.J. died on December 25. She was 87. With her typical steely resolve and impeccable timing, she magically arranged for her 5 grown grandchildren to be in the same place at the same time at Christmas. Born... View Obituary & Service Information

The family of Daphne Knight created this Life Tributes page to make it easy to share your memories.

Send flowers to the Knight family.