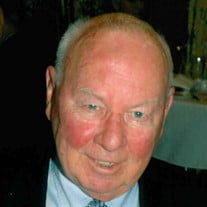 Zipf, Elvin F., 92, passed away on May 23, 2019 at his home in Pompton Plains, surrounded by his loving family. In his passing he leaves behind his beloved wife Joan (nee Ross), his daughters, Deborah Zipf of Stratford, CT, Lisa Schofield and son-in-law Gerald of Whippany, NJ, and Lauren Dunne and son-in-law Barry of Fairfield, CT. He had seven grandchildren, ten great grandchildren. He also leaves behind two sisters, Alice Moore of Summit, NJ and Virginia Metzler of Chatham, NJ; and brother-in-law Walter Ross and sister-in-law Dorothy Ross of Macungie, PA. He is survived by many nieces, nephews and cousins. Elvin was born on January 26th, 1927 in Newark, NJ to Alice (McKenna) and Elvin A. Zipf. He received his BS degree from Seton Hall College. He married Joan on September 29th, 1951 in St. St. Joseph’s Church in Maplewood, NJ. They were happily married for 67 years. They lived in Redding, CT; Mucungie, PA; and Avon by the Sea, NJ, before relocating to Pompton Plains, NJ. He served in the Naval Air Corps in WWII. He was Director of Marketing for Purdue Frederick Pharmaceuticals in Norwalk, CT. He was a loving, kind and compassionate man, always had a twinkle in his eyes, and had a good sense of humor – he loved Irish jokes. He loved traveling, he and Joan visited five continents. He also loved family gatherings, music and dancing, he liked to entertain fun parties with family and friends. Above all, he adored his children, grandchildren and great grandchildren, who called him “Great”. He will be missed by all. Cremation Services were private. Arrangements by Cremation Society of New Jersey – 470 Colfax Avenue, Clifton, NJ. Donations in Elvin’s memory can be made to St. Jude Children’s Research Hospital - 501 St Jude Place Memphis, TN 38105 or to Wounded Warriors - Wounded Warrior Project, PO Box 758517, Topeka, Kansas 66675-8517.

Zipf, Elvin F., 92, passed away on May 23, 2019 at his home in Pompton Plains, surrounded by his loving family. In his passing he leaves behind his beloved wife Joan (nee Ross), his daughters, Deborah Zipf of Stratford, CT, Lisa Schofield and... View Obituary & Service Information

The family of Elvin F. Zipf created this Life Tributes page to make it easy to share your memories.

Send flowers to the Zipf family.