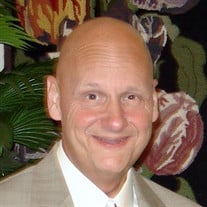 Cortelyou, Geoffrey Hayden, age 63, of Woodland Park, NJ died on Thursday, November 2, 2017 in Summit, NJ after valiantly battling 3 life-threatening illnesses. Born 12/20/53 in Lakewood, OH, he was the eldest son of June and Robert Cortelyou. Geoff graduated with honors from Boston University with a B.S. degree in broadcasting and film. His career in television news production spanned more than 4 decades, most recently as Senior Production Manager with CNBC. He began his TV career at WBOY in Clarksburg, West VA, and also worked at WDTN, WTVT, WTSP, WFLA and WPEC. Known to be calm under pressure in a fast-breaking news environment, Geoff was widely respected in his field. Mark Hoffman and Steve Fasthook of CNBC stated that he “added precision and creativity, and that he forever changed the way we produce events, making them superior to anything we had produced before.” As skilled as he was at his day job, Geoff thought of himself as a musician who dabbled in TV production, instead of the reverse. A talented lead guitarist, “Cort”, as he was known, played with many rock bands throughout the years and was happiest when playing the music he loved. Geoff is survived by his wife of 37 years, Sandra McArdle Cortelyou, twin daughters Alyssa and Brianna Cortelyou of Woodland Park, NJ, sister Cinde Cortelyou of Tampa, FL, brother and sister-in-law Greg and Rochelle Cortelyou of Schenectady, NY, nephews Jacques Cortelyou of Troy, NY, Graig and Caitlin Cortelyou of Albany, NY, 15 cousins, colleagues and friends too numerous to count. Geoff was preceded in death by his parents. An informal celebration of his life will be held as an open house at the family home in Woodland Park, NJ on 11/11/17 from 1-6 PM. In lieu of flowers, donations may be made to the American Cancer Society.

The family of Geoffrey H. Cortelyou created this Life Tributes page to make it easy to share your memories.

Send flowers to the Cortelyou family.