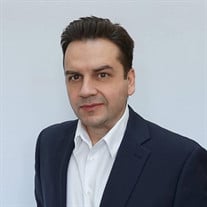 George Albert Rubsam, of Secaucus, passed away unexpectedly on October 1st 2019 at the age of 45. George, born November 4th 1973, was proud to have been raised in Paterson, New Jersey. There, he attended St. Gerard Majella School and graduated from Don Bosco Technical High School. Following high school, George received his Bachelor’s degree from Montclair State University and his Master’s degree from Harvard University. George spent the majority of his professional life working in the marketing industry in many roles including marketing executive, data technology specialist and management consultant. In the late 2000’s, George briefly stepped away from the marketing industry to serve as the Director of Operations for U.S. Senator Frank R. Lautenberg’s re-election campaign and as a Projects Specialist post-election. This was George’s most beloved and rewarding professional experience. Always an academic, George more recently enjoyed being an adjunct professor at New York University and the Fashion Institute of Technology. He truly treasured the connections he made with both his colleagues and his students. In addition to his professional career, George was actively engaged in his community. At the time of his passing, George was a candidate for the Secaucus School Board, hoping his participation would help give every child the best chance to succeed. He also volunteered as a coach for the Secaucus Recreation youth soccer league. His interest in soccer lead George to become affiliated with the New York Red Bulls just prior to his passing. He was incredibly proud to be part of their youth program coaching team. George was pre-deceased by his father, George Francis Rubsam. George is survived by his wife Kimberly Hunt and their daughter Reese; his mother Doris Rubsam; his sister and brother-in-law Myriam & Steve Hirsch; his sister Kathleen Rubsam; his two nephews Kenneth Gonzalez and Chandler Hirsch; his niece Chloe Hirsch; his mother-in-law and father-in-law Carol & Richard Hunt; his many aunts, uncles and cousins. He also leaves behind countless friends, neighbors, colleagues and students. George touched the lives of so many people. He always encouraged positivity and was often busy trying to help a family member, friend, student or even stranger find their happiness. In their pursuit of happiness, George would often urge people not to procrastinate, as tomorrow is never promised. His untimely passing could not have illuminated that truth more brightly.

George Albert Rubsam, of Secaucus, passed away unexpectedly on October 1st 2019 at the age of 45. George, born November 4th 1973, was proud to have been raised in Paterson, New Jersey. There, he attended St. Gerard Majella School and graduated... View Obituary & Service Information

The family of George A. Rubsam created this Life Tributes page to make it easy to share your memories.

George Albert Rubsam, of Secaucus, passed away unexpectedly on...

Send flowers to the Rubsam family.