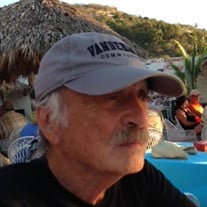 Harold Richard Stone was born on August 21, 1930 in Providence, Rhode Island to Alexander and Mary Stone. Harold was raised in Woonsocket, Rhode Island and graduated from Dean Academy in Franklin, Massachusetts in 1948. He received a B.S. from Lowell Tech (now known as UMass Lowell) in 1952. After the Korean War began, Harold enlisted in the U.S. Army and served in Korea in that conflict from 1952 to 1954. After his service, Harold used the G.I. Bill to attend the University of Pennsylvania, where he earned an M.B.A. from Wharton School of Business. Later, he received an M.S. in consumer psychology from Rutgers University. In 1957, Harold moved to New Jersey, where he met his wife Carole Kreeger, now Carole Stone. The pair married in 1958 and had two children, John Alexander Stone and Katherine Margaret Stone (now Hinchliffe). Harold and Carole raised their children in Verona, New Jersey, where they lived together until his passing. Harold spent many years commuting to New York City, where he applied his expertise in statistics and business to his long career in market research. Over his decades in the field, he worked for the New York Central Railroad, Prudential Financial, the pharmaceutical company Schering, and the pharmaceutical advertising agency William Douglas McAdams. Harold had an agile sense of humor; silly with and often eliciting joyous giggles from young children, and smart and sometimes dry with adults, often inducing broad smiles and compliments from those who admired the subtlety of his wit. Harold was preternaturally patient with his family and helped instill in his children a love of learning, humor, and the importance of decency, ki ndness and doing the right thing. He enjoyed, among many family activities, literary pursuits with his wife, watching baseball with his son, sharing music with his daughter, watching Marx Brothers movies with his children, and doting on his grandchildren. Harold’s intellect was equally nimble as he was both highly educated and an impressive autodidact, regularly completing the Sunday New York Times cross-word puzzle, quickly and in ink (never in pencil). In his retirement, Harold nurtured his interests in literature, art, and more as a member of the James Joyce Society and the Archeology Society of America. For decades, he served as the first reader for his wife, Carole’s, work as a poet. For years, he was a devoted gardener and potter; his pottery pieces decorate much of his home. Because of his eclectic interests and excellent recall, Harold was known by his family as a walking encyclopedia and, thanks to his statistics degree, a walking calculator. The Stones own a second home in East Hampton, New York, where they spent summers for more than three decades. For many years, they traveled to Zihuatanejo, Mexico during the cold winter months, where Harold enjoyed the beaches and local pastries. Harold was a devoted husband, father to his children, and grandfather to Katherine’s daughters, Emma and Margaret Hinchliffe. He is survived by his wife, Carole; children John and Katherine; and his granddaughters. Harold is pre-deceased by his son-in-law Richard G. Hinchliffe.

Harold Richard Stone was born on August 21, 1930 in Providence, Rhode Island to Alexander and Mary Stone. Harold was raised in Woonsocket, Rhode Island and graduated from Dean Academy in Franklin, Massachusetts in 1948. He received a B.S. from... View Obituary & Service Information

The family of Harold R. Stone created this Life Tributes page to make it easy to share your memories.

Send flowers to the Stone family.