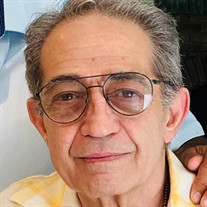 Simone, Joseph P., 74 of Sussex, formerly of North Haledon, passed away peacefully on August 17, 2021, surrounded by close family and friends. He was born to parents Joseph and Eleanor Simone on March 5, 1947, in Paterson, New Jersey. He attended Hawthorne High School and initially worked with his father doing auto-body work which later led him to opening his own shop. He married his sweetheart Marie (Siniscalchi) at age 19 and recently celebrated 55 years of marriage together this past February. Joe was exceptionally talented in many ways. He was once the lead singer traveling around the country in a band called “Court of Appeals.” He was also an artist who thrived in both painting and metal artwork, displaying some of his works in a gallery in Ridgewood. In his spare time he used his auto-body experience to restore many antique cars, some of which went on to win “best in show” awards. He had a passion for making wine, winning many awards including several gold medals in the New York State Fair and Winemaker of the Year at Corrado’s Annual Amateur Winemaking Competition. He was a great su-chef (to Marie) and especially loved making his famous homemade raviolis for his grandchildren. Joe’s door was always open. It was never a 5 minute stay and you always had a great meal and lots of laughs. Everyone was welcome and invited for Sunday Dinner. He cherished his friends and family. He married Marie, the love of his life, in 1966, who survives him. He is also survived by his son Joseph Simone and wife Maria Elena from Wayne, his son Michael Simone and wife Maria from Franklin Lakes, his daughter Monique Monaco and husband Michael from Wayne, thirteen loving grandchildren, his brother-in-law David Siniscalchi of Paterson, his sister Donna, his three brothers Dave, Mark and Glen, nieces and nephews. A Memorial Mass will be held on Monday, August 23rd, 2021 at 10 AM at St. Anthony RC Church – 276 Diamond Bridge Avenue, Hawthorne, NJ.

Simone, Joseph P., 74 of Sussex, formerly of North Haledon, passed away peacefully on August 17, 2021, surrounded by close family and friends. He was born to parents Joseph and Eleanor Simone on March 5, 1947, in Paterson, New Jersey. He attended... View Obituary & Service Information

The family of Joseph P. Simone created this Life Tributes page to make it easy to share your memories.

Send flowers to the Simone family.