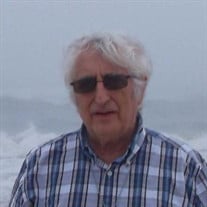 Pietro Paolo Bergonzelli (Piero), of Hackensack, New Jersey, passed away on Tuesday, November 9, 2021 in Hackensack University Medical Center at the age of 77. Piero was born on January 21, 1944, in Valenza, Italy, to father Angelo Bergonzelli and mother Antonietta Golin Bergonzelli. He spent his early life in the small town of Valenza with a close-knit group of friends and family including his beloved younger sisters, Gabriella and Silvana. Piero graduated from the Instituto Orafo G. Comolli, in Valenza Po, Italy with a specialization in jewelry engraving, diamond setting, model making and design. Over the years, he worked for many well-known jewelry companies, including IB Goodman, Jacmel, and David Webb. At the age of 26, he moved to the United States where he met his wife Laura, with whom he recently celebrated 50 years of marriage. Piero was a talented jeweler, artist and storyteller. He was a pious Catholic who had a special devotion to the Virgin Mary. His friends and family remember him for his crazy sense of humor (including his special photoshopped Christmas cards), his knack for connecting with people in all walks of life, and his ability to tear up a wedding dance floor like a person half his age. He was especially loved by his grandchildren who enjoyed his animated stories and silly jokes. Piero was preceded in death by his parents. He is survived by his wife Laura Bergonzelli; sisters Gabriella and Silvana Bergonzelli; children Shana Bergonzelli-Graham and Darin Bergonzelli; and grandchildren Jack Tucker Graham, Michael Paolo Graham and Schuyler Hellen Graham. A Catholic Funeral Mass is planned for Saturday, November 13, from 2 pm to 3 pm at St. John the Baptist Church in Piermont, New York. Friends and family are welcome to attend. People wishing to honor Piero’s memory can make donations to St. Jude Children’s Research Hospital at www.stjude.org.

The family of Pietro Bergonzelli created this Life Tributes page to make it easy to share your memories.

Send flowers to the Bergonzelli family.