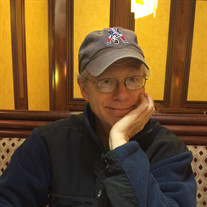 Richard Greeley Hinchliffe was born on August 11, 1950 in Springfield, Vermont. The son of John Henry Hinchliffe Jr. and Mary Redman Hinchliffe, he grew up in Lexington, Massachusetts, where he became a lifelong Red Sox fan and was an ever-popular president of his graduating class. Richard (Dick) went on to Princeton University, where he studied English literature, was a member of the Quadrangle Club and played squash—a new sport adding to his repertoire as a first singles tennis player and enthusiastic basketball player. He later studied modern literature at the University of Sussex in the United Kingdom, where he became the de-facto American expert on Watergate. Richard’s career as an award-winning journalist began in Madison, Wisconsin at WORT and continued in New York at WNYC and Bloomberg Radio; later, he shared his expertise as a professor of journalism and director of radio at Montclair State University and Centenary University. In New York, he met his wife of 28 years, Katherine Stone Hinchliffe. They moved to Glen Ridge, New Jersey, where they raised their two daughters, Emma and Margaret (Maggie). Known as a gifted athlete as well as for his quick wit, Richard loved Boston sports, The Beatles and ’60s music, and his family. Richard died at home with his family on Feb. 1, 2019. He was predeceased by his parents and his brother, John Henry Hinchliffe III (Terry). Richard is survived by his wife, Katherine Margaret Stone Hinchliffe; his daughters, Emma Stone Hinchliffe and Margaret Greeley Hinchliffe; his brother, Roger Redman Hinchliffe; and his sister, Sally Huntting Hinchliffe MacMillan. In lieu of flowers, the family asks for donations to the American Brain Tumor Association. The Celebration of Life for Richard Hinchliffe will be on Friday, February 15th at 1 p.m. at the Glen Ridge Congregational Church; 195 Ridgewood Ave in Glen Ridge, N.J.

Richard Greeley Hinchliffe was born on August 11, 1950 in Springfield, Vermont. The son of John Henry Hinchliffe Jr. and Mary Redman Hinchliffe, he grew up in Lexington, Massachusetts, where he became a lifelong Red Sox fan and was an ever-popular... View Obituary & Service Information

The family of Richard Greeley Hinchliffe created this Life Tributes page to make it easy to share your memories.

Richard Greeley Hinchliffe was born on August 11, 1950 in Springfield,...

Send flowers to the Hinchliffe family.