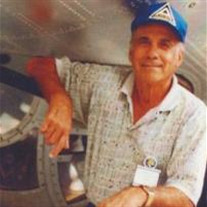 PERRI, STEVEN J., 95, formerly of Long Branch, NJ, and Fort Myers, FL, died on Sunday, August 13, 2017. As a young man, Steve worked at Perry's Bowling Center, Perry's Golf Range and Perry's Hilltop Club, all owned by his father, before joining the military. During WWII, he was a member of the Delta Rebel 2 crew and was a Flying Fortress (ball turret) gunner on a B17. In July 1943, the town of Long Branch welcomed him home with a hero's welcome. He received three Air Medals and a Distinguished Flying Cross. Steve opened Perry's Trophies and later expanded into construction. He was instrumental in converting the Nautilus motels in Long Branch and Sea Bright into condominiums. In later years, Steve became the 91st Bomb Group historian and editor of the Ragged Irregulars. He moved to Kelly Greens in Ft. Myers, Florida, where he enjoyed golf, tennis and woodworking. When he was 77 he shot his age in golf. Steve was predeceased by his parents, James F. and Mildred (nee Scutellaro) Perri. Formerly married to Dorothy (nee Bradley) who is deceased. He is survived by his wife, Nancy Perri; two sisters, Marie Kowalczyk and Dorothy Kulaga; his son, James Perri; two daughters, Lynn (Frank) Payer and Kim Barney; four grandchildren, Stephen Perri, Ryan (Jamie Lee) Perri, Tony (Kim) Barney and Danielle Barney; and three great-grandchildren.

The family of Steve James Perri created this Life Tributes page to make it easy to share your memories.

Send flowers to the Perri family.