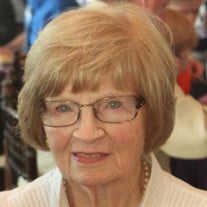 Teresa Ellen McGahren was a loving wife, mother, grandmother, sister, friend and caregiver. She left this world on January 30, 2021, at the age of 93. Teresa was born to Grace and Patrick Holland on September 17, 1927, on a farm in Rossnowlagh, Ireland on the banks of the Donegal Bay At the tender age of fifteen, she left home to work and live with a family in Belfast, likely applying some of the practical skills she had learned on the farm. Several years later, she moved to London where she trained to become a Registered Nurse, attending to the sick and injured in the difficult years following World War II. It was during this period she met William James McGahren (Jim) who was from the nearby village in Ireland and whom she would later marry. She immigrated to New York in 1954, at the encouragement of Jim, and became a United States citizen in 1960. Together Teresa and Jim had four children, Patrick, John, Grace and Elizabeth and they spent those early marital years in Queens. Teresa worked the night shift at the hospital and took care of her children during the day to support Jim while he earned his Ph.D. in Organic Chemistry. This commitment to supporting her husband, providing care to those who needed it, and still not missing a beat as a mother, is something that would endure long past her time in New York. The family migrated to New Jersey in 1967 and immersed themselves in the community of Demarest. Teresa was renowned for her vim and vigor at family gatherings, our church and within her large friend group. She was an excellent cook who relished feeding those she loved and seemed to be able to do anything with her hands. She sewed, knit, and even re-upholstered furniture. Teresa returned to nursing working night shifts at Nyack hospital and then set up her private nursing practice. Her gift as a nurse was evident in the trust and gratitude from these families with relationships lasting well beyond the life of her patient. Teresa’s volunteer work in her later years after retirement included working in a food pantry and serving meals to those at risk through St Cecelia’s in Englewood, as well as quilting with a group of women to make quilts for the sick. Since her husband Jim passed, Teresa has lived in a senior development condo where she again bonded closely with many of the residents. Brookside was a blessing for her during her last few years, and even at the great age of 93 enjoyed socials, dinner parties and attending church with friends. Family meant everything to Teresa and she both enjoyed and looked forward to seeing family every chance she got. Her last trip to Ireland was in 2017 at the age of 90 when she returned to the family farm to spend time with her sisters and brother. Teresa is lovingly missed by her son Patrick and wife Brigitte McGahren, her son John McGahren, her daughter Grace and husband Christopher Mulliken, her daughter Elizabeth and husband Christopher Kenny, her sisters Josephine Mills and Kathleen Harrington, and especially her grandchildren: Peter, Lucas and Kenna, Ian, Megan and Fiona McGahren, James and Gwyneth Mulliken, Aidan and Kate Kenny.

Teresa Ellen McGahren was a loving wife, mother, grandmother, sister, friend and caregiver. She left this world on January 30, 2021, at the age of 93. Teresa was born to Grace and Patrick Holland on September 17, 1927, on a farm in Rossnowlagh,... View Obituary & Service Information

The family of Teresa Ellen McGahren created this Life Tributes page to make it easy to share your memories.

Send flowers to the McGahren family.