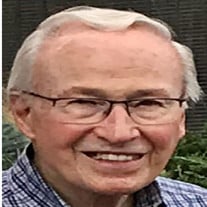 Pfeifer, Walter E. – a 65 year resident of Berkeley Heights, NJ - passed away on May 13, 2022 at Center for Hope Hospice in Scotch Plains, NJ at the age of 92. He is the devoted and beloved Husband of 70 years to June and cherished Father of daughters Lynda Sexton of Plainfield, NJ and Lonna Pfeifer of Berkeley Heights, NJ; Father-in-Law to Robert Sexton and adored Pop-Pop to Kyle and Jennifer Sexton. Walt was predeceased by his parents, Edwin and Helen Pfeifer of Short Hills, NJ; sister Elinor MacFarlane and brother-in-law Gene Zwigard. Walt and June grew up in Maplewood, NJ graduating from Columbia HS Class of 1948. Walt attended Lehigh University before serving in the Korean War as a US Army Sergeant in the ASA. He completed his degree at Rutgers University earning a BA in Business Administration, Class of 1956. He also attended Seton Hall University Law School for several years. Walt was a Plant Manager in the family business Pfeifer’s Tasty Meats in Newark, NJ for 17 years until it was sold. He was then the owner of Richard P. Rita Personnel Consultants with offices in 3 towns. Before retiring Walt served as the CPC Executive Director for the New Jersey Association of Personnel Consultants in Livingston, NJ. Walt was an avid tennis player playing into his mid-80’s in several leagues including in Summit and Chatham. He and June loved the outdoors, hiking, biking, taking scenic drives and enjoying summers and vacations at their beloved ‘Jersey Shore. Visiting their daughter Lonna in Tucson, AZ they traveled the west coast visiting National Parks—of which Walt was a member. Walt also loved their vacations with his daughter Lynda and her family including to Disney World, up the beaches along the east coast to Tucson, A.Z. Walt was a Family Man with a great sense of humor, honor and never met a person who didn’t love, admire and draw knowledge, comfort and love from him. Although he is deeply missed, his loving generous soul lives on in his family, relatives and many dear friends, and their precious memories of their Husband, Dad, Pop-Pop, Brother, Son, Cousin and Friend. In lieu of flowers donations can be made to the American Heart Association or the National Parks Conservation Association.

Pfeifer, Walter E. &#8211; a 65 year resident of Berkeley Heights, NJ - passed away on May 13, 2022 at Center for Hope Hospice in Scotch Plains, NJ at the age of 92. He is the devoted and beloved Husband of 70 years to June and cherished Father... View Obituary & Service Information

The family of Walter Edwin Pfeifer created this Life Tributes page to make it easy to share your memories.

Send flowers to the Pfeifer family.